This is a post-apocalyptic setting and game, based in Jason Tocci's 24XX. Roll different size dice for skills and affiliations to determine how much you succeed or fail at risky endeavors. New rules for bonds, bartering, scavenging, looting hoards, wearing out and repairing gear. Scavenge with care.

Magog is a nightmare game. It imagines what happens if everyone loses their shit.

Magog is a simple game.  You roll one die at a time. The default size is a d6. If you roll 2 or lower, you're screwed. 5+ you're all good. 3 or 4 ... the moderator weighs in with a setback or a partial success. If your character is skilled at something, you roll a bigger die.

Magog is a small game. Like all the 24XX family, it's a zine format with a pretty and evocative cover, a column of rules (here the rules run a few lines over), a page and a half of character generation, and a page of random tables to imply the problems and features of the setting.

Make two or three hours. Gather some friends (online, for safe distance). There's a Discord server (24xx cord). Play to find out: what's the worst that could happen?

Cry havoc, and let slip the dogs of war.

In a last paroxysm of a lame duck government, they did.

Not all the world was destroyed.

Your city survived - kind of. But the Internet, and air travel, and international shipping, and gasoline refineries, and the electrical grid ... all the things that made your city work ... those went away.

The world has overturned, and some people - the ones who distantly tended the fields and orchards and pastures and cowbarns, the ones who went out on brave little boats to bring back fish, the ones who huddled in the woods with rifles waiting for the game - have suddenly become inarguably essential to your lives. You need to learn what they know, because without the infrastructure that the war has ruined, they can't do all the work themselves.

You were born to a new life like a phoenix from the ashes of the war. You've gained skills you never imagined Before. Some of the ashes of your old life cling to you. You can sometimes rely on the bonds you formed and gear you used Before. But you'll never be free of what you've done and seen.

All in three pages plus a pretty cover.

In order to download this disaster you must purchase it at or above the minimum price of $5 USD. You will get access to the following files:

Support this disaster at or above a special price point to receive something exclusive.

Made available by paid purchasers. Please use one of these if you're not sure whether you're ready for the apocalypse. Come back and pay if you like it. 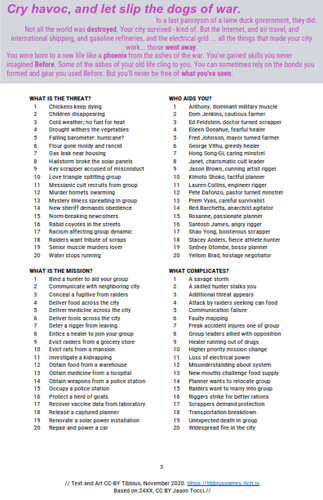 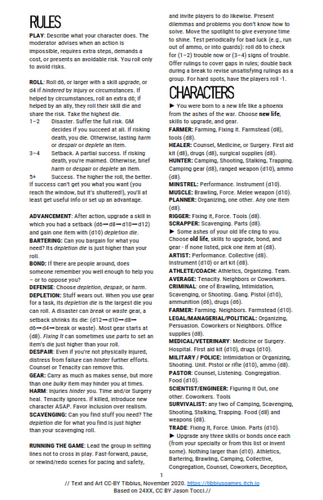